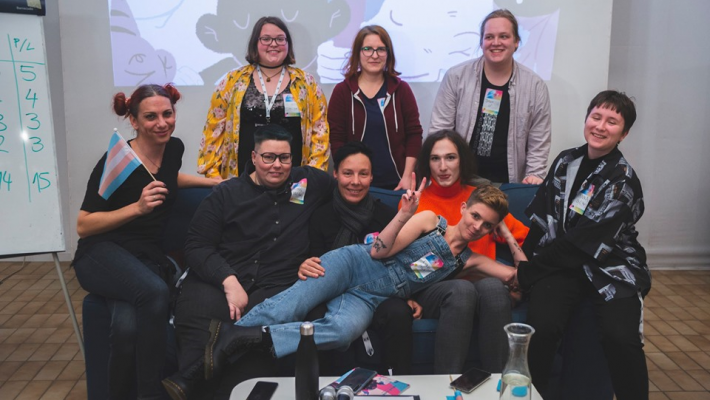 Ljubljana Pride Association participated in TransMisija VI in November at the Poligon Creative Center in Ljubljana, the central annual meeting in the field of transgender people. This year it was held under the theme “Do it yourself”.

This year’s TransMisija VI was opened by Linn Julian Koletnik, M.Sc. gender studies and director of TransAkcija Institute, alongside Blažka Plahutnik Baloh, mag. psychologist, program associate in the field of counseling and self-help of the Legebitra Society who presented what has been happening in the last year in the field of legal recognition of gender and gender confirmation through medical transition. They reported minimal progress, to which the title of the introductory presentation refers. The introduction was intended to address the urgently needed – but not yet implemented – systematic change in the areas of gender recognition and the treatment of transgender people in the past year.

At this year’s TransMisija, we learned that in the last year TransAkcija sent letters to the Ministry of Health and held a meeting with an interdisciplinary gender certification council, where they expressed their requests for formalization of the gender confirmation procedure. These requests were refused.

The third section introduces a new guide, Med modro in roza: priročnik o transspolnosti, which provides basic information on transgender issues, and in particular tips to support the understanding of one’s gender identity in a world and society where transgender people most often lack this support. The guide is also intended for anyone who accompanies transgender people on their journey or who wants to be their ally. Evan Grm, one of the authors of the manual, also talked with Tanja Blažek, the mother of a trans child, for this component of the meeting. Tanja’s tips on how to support a trans child, as an example of good practice of parental response to child disclosure, can also be found in the manual itself.

In the future, transgender rights activists wish to regularly cooperate with the members of the interdisciplinary gender certification board and to recognize NGOs as equivalent experts with experience of providing comprehensive support to transgender people who are not currently receiving healthcare. They want to improve the initial part of the medical process relating to psychiatric and psychological treatment, educate medical staff, achieve transparency about the entire course of the medical process and completely separate the legal and medical processes.For more about the legal gender recognition discussion, the legal gender confirmation process, conditions, gender confirmation through medical transition process and obtaining a mental health diagnosis see here.