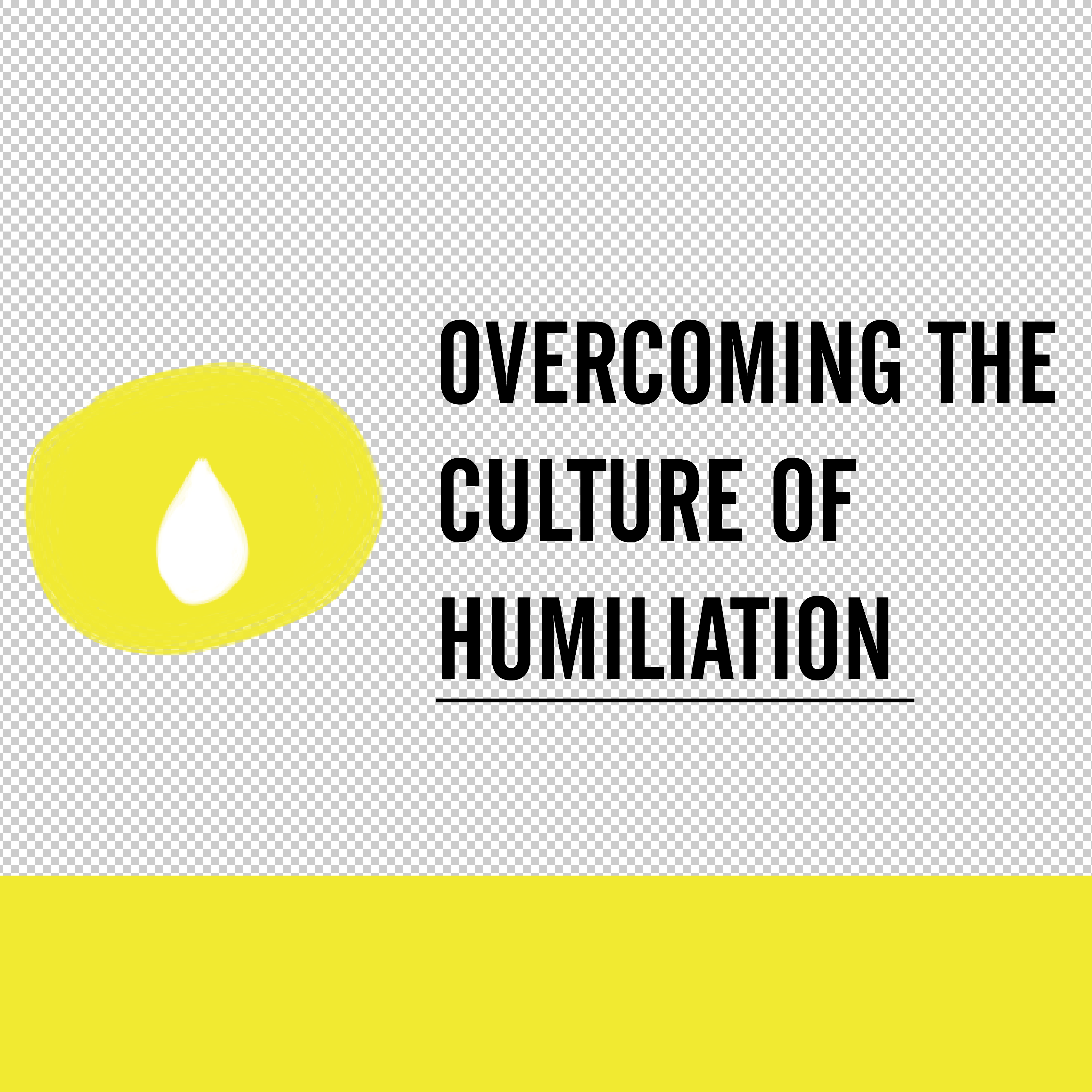 Overcoming the Culture of Humiliation

PROJECT: OVERCOMING THE CULTURE OF HUMILIATION

The aim is to empower young LGBTIQ+ people to express their experiences of (cyber)bullying through art in order to also empower others. Goals of the project include:

This project is aimed at quite specific target group – young LGBTIQ+ individuals who experienced some form of (cyber)bullying. This group faces serious challenges but lacks institutional support in Slovenia. The reality of Slovene context is that there is a lot of stigma around LGBTIQ+ identities, meaning LGBTIQ+ people are faced with institutional discrimination and oppression.

Research conducted in 2017 showed that the implications coming from that are huge: most of the young LGBTIQ+ people faced violence and/or discrimination based on their sexual orientation and/or gender identity from peers during their education and in almost same percentage the institutional response failed. Similarly showed results gathered in practice from contact with the LGBTIQ+ community. Also, by aiming at such a specific and challenged group, we put focus on their inclusiveness and diversity – by giving them a voice.

Furthermore, discussion about (cyber)bullying is not recognised as important in general public meaning there are no systematic and strategic support or attempts to tackle it; it is not even recognised as a big problem.

This is an innovative approach in a way that it empowers young people to express themselves by art, opening the possibility to not only offer them art as an method which might help them to deal with their own experience of violence but also the opportunities to influence and help others by promoting the strong anti-violence messages – this being the biggest benefit of this project.

Art is the most powerful media because everyone can use it to express themselves; it is a language everyone understands. Also, art shows the emotions, the state of a person who created; it is personal and intimate – making it easier for others to empathize with the cause presented. It builds understanding on a completely different level. Another very important step in that process is inclusion of LGBTIQ+ youth – supporting them, giving the mind dependence they so often lack and offering them a powerful tool. By including LGBTIQ+ youth to tackle the challenges that are happening in general youth community, we are giving them space in society where their values, skills and needs are recognized and appreciated.

The project has both an offline and online presence. Offline, we focus on working with young LGBTIQ+ people with the experience of (cyber)bullying throughout the series of art oriented workshops with constant pedagogical support. Online, we showcase the art of the LGBTIQ+ youth and raising awareness with general public.

Opening of the exhibiton – Overcoming of Culture of Hate in Town Hall. Photos: Marta Torres 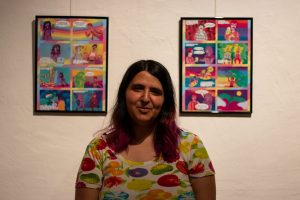 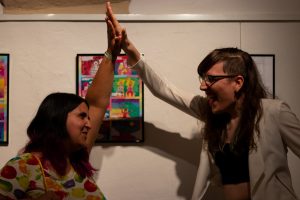 By implementing the project, the group of young people learn to use the methodologies of storytelling and creating a safe space. We help empower young LGBTIQ+ people who have experienced bullying to work through their traumatic experiences and use them in storytelling. They wish to use storytelling as a means to raise awareness about bullying based on sexual orientation and/or gender identity among the general public, but especially among the youth.

In the project, there are two main educational processes: first using storytelling and second creating a safe space and offering support for young people. When the project group masters these competencies, they implement a 4-day storytelling workshop for LGBTIQ+ youth who have experienced bullying based on their sexual orientation and/or gender identity. There, the youth will learn to use storytelling, including alternative types of storytelling, to express their own experiences. After the workshop, the youth and products of the workshop will be included in other activities of Ljubljana Pride.

The impact of the project on the group of young people will be gaining competences for youth work and gaining opportunities to further collaborate with Ljubljana Pride and similar organizations. The impact on the participants of the project will be their empowerment developing the competences to use storytelling, as well as the possibility for further collaboration. The result of the project will be the stories in different formats, created at the workshop, which will also be used in Ljubljana Pride’s further activities. The goal of these activities will be raising awareness about bullying among LGBTIQ+ youth, so for this reason, this will also be one of the results of the project. 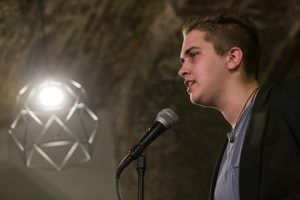 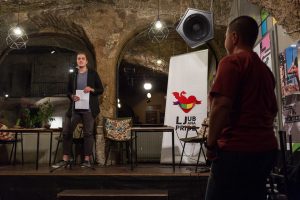 The project Culture of Humiliation consists of several parts: online campaigns, exhibitions and interactive workshops. The main goal of the project is to raise awareness about the causes and consequences of peer violence online and offline, experienced by young people because of their sexual orientation and/or gender identity and expression.

The offline part of the project consists of poster art exhibitions and interactive workshops in high schools and youth centers.

The art works that are exhibited are works of young artists who use art to share their own experiences of violence and discrimination based on sexual orientation. Art is a universal language of emotion and an excellent vehicle of social change in the general public as well as for empowering targets of discrimination and intimidation. Each opening of the exhibition will be accompanied by the story of a person who has faced peer violence based on sexual orientation and/or gender identity and expression. Interactive workshops are aimed at all young people and at victims and witnesses of violence. 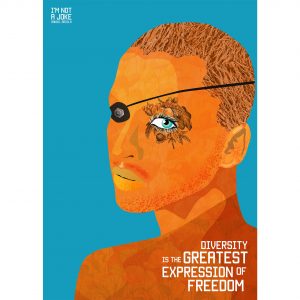 By focusing not only on victims of violence, but also on witnesses, the project goes beyond individual victims and bullies to highlight the wider social context the violence is rooted in. The project also aims to prevent violence by raising awareness.

The online part of the project is a social media campaign, which uses similar content as exhibitions and workshops. Its aim is to raise awareness about the consequences caused by intimidation and creating a secure virtual space for exchanging and sharing stories and experiences of discrimination, harassment, intimidation, as well as empowering victims to overcome them. 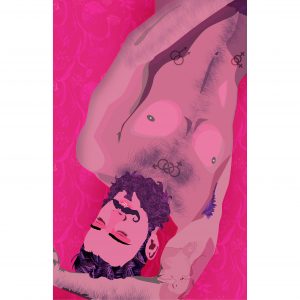 Within the project, we are working with two global campaigns, the #itgetsbetter campaign from the USA and the “No soy tu chiste” campaign by Daniela Arzole from Venezuela/Chile. Daniela Arzola’s works are also part of our exhibition.

The exhibition mainly consists of the works of our member and artist Antoni Karadzoski (Macedonia), who found inspiration in Arzola’s work and created his series of posters. Karadzoski’s works take us through his expirience with peer violence.

For more information, check out the project’s website: https://www.cultureofhumiliation.org/.

The project was facilitated by the European Youth Foundation of the Council of Europe (https://fej.coe.int/).